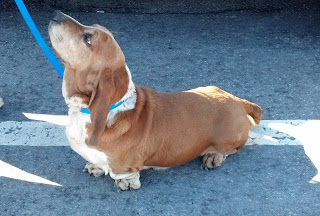 I really do not enjoy sharing bad news about any of our dogs here on the ABC blog, but I have been inspired to share this story.

Winston came into ABC as an owner relinquish. His owner didn’t want him to live outside by himself after his sister had passed away. He had lived outside since he was 11 months old. Now I know that a dog living outside isn’t a big deal in some states where the weather doesn’t get bad, but in New York this is not the ideal living situation for any dog. There is rain and wind and cold and snow here in NY.

ABC took Winston in and immediately there was a buzz on the Facebook page when pictures of him from his transport were posted. Our follows lovingly called him “a watermelon with batteries for legs” and “low rider”. He is certainly a handsome hound and nobody can deny him that!!

Winston needed ALOT of vet care as he had not been to the vet in years. All of his vaccinations needed to be updated, he needed to be neutered and he had a small tumor on his back that needed to be removed. All of this was going to cost ABC almost $1200, but in order to get Winston adopted out and make sure he was a healthy boy…this all had to be taken care of.
Laura Johnson, one of ABC’s amazing volunteers, saw the pictures of Winston on Facebook and knew that he was the hound for her and her home. I believe her exact comment was “omg, omg, omg, omg”. Laura, as do I, loves the big, wrinkly type of basset hound (Yes, there are different types of basset hounds out there and until you get to know the breed you really can’t appreciate all the different sizes and shapes of the hound). Soon after he arrived to his foster home, he took the trip to live with Laura and the rest of the Johnson Family. Laura told me soon after he arrived the following “I am so happy and so in love with him and his dinner plate sized feet. He is the quintessential basset hound. And such a sweet and gentle squishy boy. And he’s all mine!!!!” Needless to say, he was meant to be with The Johnson Family.
Today we found out that Winston was only going to be with us and The Johnson Family for a short time. He developed enlarged lymph nodes in his neck. Laura had thought it might be a residual infection from his teeth, ears and cysts, since he had only been off of his meds a couple of weeks ago. Her vet did all of the testing and discovered that Winston has stage 4 lymphoma, which is inoperable and systemic. Laura will only have him for 2-6 months more. Laura has made a promise to make him as comfortable as she can when he starts to feel any pain, she will spoil him as much as she possibly can and will make the tough decision to let him go when the time comes.
If you are anything like me, you are wiping tears from your face right now and all you can think about is hugging your own doggies as tight as possible (no matter how crazy they may look at you!!). Some of us have gone through similar situations with our bassets and know what Laura is going through right now. Some of us have only had a short time with our four-legged children and some of us have been lucky to have much more time. No matter how short or long it may be, we have given these hounds something that they may never have had if ABC wasn’t around to rescue them and if there wasn’t someone around to adopt them, someplace safe and warm to lay their head where they are truly loved…a forever home.

I feel so badly for what Laura and her family and Winston are going through right now, but in all of this Laura has inspired me with the message that she (and I as well) want everyone to hear. I would like to finish this piece with her exact words, since I couldn’t have said any of it better.

To all my fellow Basset lovers:   I am Winston’s adoptive mother, and repeat volunteer for ABC. I got Winston a couple of months ago, after falling in love with him. He spent all 9 years of his life suffering, being neglected. ABC took him in when he was going to be put down for no other reason than he was not wanted anymore.  I was over the moon to have him, and be his Mommy.   Today, I found out he has stage 4 lymphoma. It is inoperable, and systemic. I may have him for another 2-6 months according to the doctor.   I am heartbroken. I wanted to spend his remaining years making up the love he SHOULD have gotten all along. But it seems my time with him will be shortened. So I have lots of work to do for him, spoiling him and loving him until he leaves me.  Many people would say that this is so unfair and so sad. Many people don’t get involved in rescues for this reason because “I’d want to keep them all” or “I just couldn’t take seeing the suffering” and many other excuses along those lines.  I am going to tell you right now, I think that is a cop out. If you ever needed an excuse to help, to be a foster home, this is why. I may have Winston for only a few more months, but those months are going to be the best of his life. He is going to be able to leave this world KNOWING I loved him. I will make him feel like the prince he is until he takes his last breath.   Until the human race stops abusing animals, it is the DUTY of those that love them to make it right. It is heartbreaking, it is sad but the triumphs of success make it worth it. Even though this is a sad thing that is happening, I feel it is a total win. Winston got the chance to be loved, appreciated and spoiled. He was offered to opportunity to sleep on a couch, eat when he wanted as much as he wanted, be warm in the winter and cool in the summer, and to be free of fleas and other parasites. As his Mom, that is my job.  So the next time you find yourself looking away or making excuses, don’t. Foster a dog, do some transporting, buy basset crap from the Slobber Shoppe, or make a donation. Get involved and help
stop the rising tide of animal abuse and neglect. Do it for Winston, and all the dogs like him so that they might have the chance to sleep on a couch and know love. So many don’t get that chance.   Now if you’ll excuse me I have some spoiling to do.  Thank you ABC, for giving me my boy. 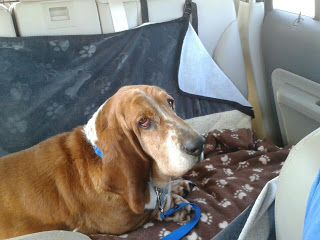 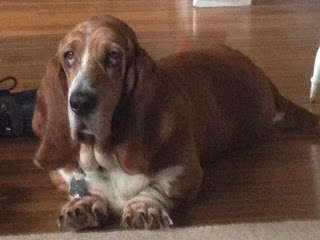 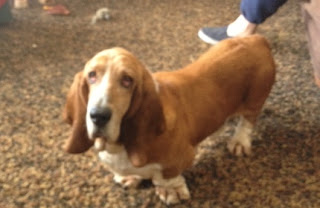