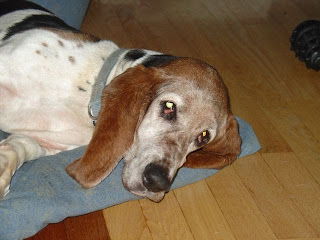 On Sept 15, ABCBHR received a call from a dog warden in the Albany area. He stated that a resident called him about a basset. The resident heard a car drive down her street, stop, heard a car door close then heard the car drive off. The resident went outside and found a 10 year old basset wandering in the street.

The dog warden did warn us that he was old, not neutered, and had several open sores. He stated that he deemed him unadoptable due to his age and medical conditions. If we could not help this senior, he’d be euthanized after his 5 days at the kennel if he wasn’t claimed.
Our Albany volunteers immediately stepped into action and got this hopeless geriatric senior who was named “Geri Patrick” out of the kennel. He went to a foster home where he played in the backyard, took walks and mingled with the neighborhood dogs. Our foster home took him to the vet and we received an estimate of $1100 for neutering, a dental, care for his open sores, and vaccinations. He was scheduled for surgery Sept 30.
Today, September 30th, Geri Patrick went in for his surgery. Once he was on the operating table, the vet discovered he was filled with cancer. ABCBHR’s volunteers decided the best thing to do was to relieve him of his suffering and send him to the Rainbow Bridge.
Geri’s ashes will be buried in ABCBHR’s memorial garden where he will join the other ABCBHR bassets who never made it to their forever home.
Rest in Peace sweet Geri Patrick.
Font Resize
Contrast
Text Us