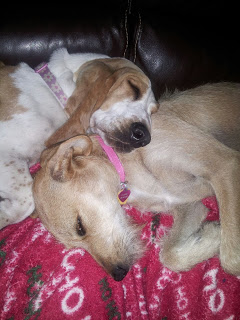 Remember Amarilla, one of the Texas 5 who was adopted by Karen and Dave and renamed Fiona? We asked about the story of Karen’s other rescued pups and especially about Cozzie who became Fiona’s BFF and teacher in adapting to her new forever home. Although Cozzie is not a Basset Hound the tale of her rescue is truly amazing and as Fiona’s mentor, sidekick and BFF we bestow honorary Basset Hound status on this wonderful girl. She is so beautiful and looks so sweet – thank you Karen for saving her precious life. And special thanks to Cozzie herself for welcoming Fiona and taking her under wing.

Following is the awesome story of Cozzie’s rescue in Cozumel, Mexico as told by her awesome Mom, Karen. Thank you so much for allowing us to publish this very inspiring story.  We are so sorry for your loss of Fred and your senior cat.  We know how it feels but they have certainly left you a wonderful ‘legacy.’  Please do continue to share stories of Cozzie, Fiona, Pumper and Ethel – they are all such beautiful girls and look so happy in their wonderful home!

“It all started at the end of 2011. We lost our dear boy, Fred to cancer in November. He was 12 1/2 years old. He was our first basset hound. Although we had 2 other hounds, Ethel and Pumper, we still felt the emptiness of Fred’s absence. I wasn’t sure that we were ready for another basset yet, but a friend was showing me pics of bassets on Petfinder.com and that was it!! I felt we had the opportunity to help a hound in need. 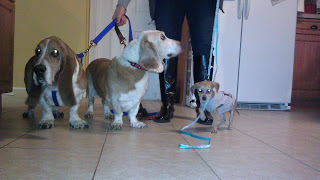 I was in contact with Tri-state Basset Rescue, but there weren’t any good matches for us, as we also had older cats, and needed a dog that wouldn’t chase them. At some point, I came across ABC Rescue and I saw the story about the Texas 5, so I contacted them right away. I spoke with Mr. Rodwell, and he informed me that there were a lot of applicants to adopt these babies, and that I probably would not be able to get one of them. I must admit I was a bit saddened, but I figured the right basset will come our way at the right time.

In the meantime, we went to Cozumel, Mexico for vacation. About 5 days into the vacation, after a day of scuba diving, we stopped at a so-called horse stable. It was four sticks in the dirt, with a horse attached to each stick. There was a man that was shoeing a horse, so we got out of the car to watch. There she was this tiny, little pup, lethargic, filled-with ticks, and grease all over her head. I was asking the man for water for her, and he said, “Don’t worry, I take care of puppy”. I felt it very difficult to leave her, but what could we do. We were in another country, and had no idea of the laws about pets. I couldn’t stop thinking about her. I really didn’t think she would make it through the night.

The next day, we went diving, and there was a woman, Beth, who went diving with us the previous day. She is an American, who lives most of the year on Cozumel. She volunteers for the Cozumel Humane Society. She said, “Oh you can get that puppy, I will help you!  You can take that puppy home to New York if you want, it’s not a big deal!” I couldn’t believe it!! Now I thought it would be rough convincing Dave, but he was like, “that little dog will be no trouble at all”, (who knew how big she would get hahaha) even if we got one of the Texas 5. I could hardly wait to get off that boat and we knew her name would be Cozzie.
After that day’s diving, Beth went to the stable on her scooter and asked the man if she could take the puppy, and he just let her have her. We followed behind and she handed me this poor pathetic little puppy. Now we have the puppy, what are we to do!!!! This poor baby vomited in the car, someone was feeding her stew with onions.
We had previous plans, with the dive master, Eduardo, Beth and some of their friends to meet for an authentic Mexican meal, so the puppy went with us. At that dinner, Eduardo called his veterinarian, Dr. David Omar of Veterinaria Cozumel, and made arrangements for him to open his office to meet with us. Eduardo escorted us, first to get us to the place and second to translate. Cozzie was only 4 pounds, approximately 5 weeks old. She had worms, ticks, fleas and was dehydrated. He gave her fluids, and had to keep her there. We were leaving in 2 days, but Cozzie would not be well enough to travel.
So Beth had given us information about the Humane Society of Cozumel Island. Teresa, another volunteer, informed us that a friend of hers would be flying to Newark the following week and could transport Cozzie for us. So in return, we gladly escorted a puppy to her new family at our connecting flight in Atlanta. Everyone who helped us, continued to do so after we left. Dr Omar was sending me updates, in broken English, but I could understand everything he sent. Beth went to see her as well as Eduardo. Each sending me emails and/or facebook messages about our little girl. It was so great to have such caring people, treat this little helpless puppy, who would certainly have faced death if it wasn’t for them. We are humbly indebted to them. 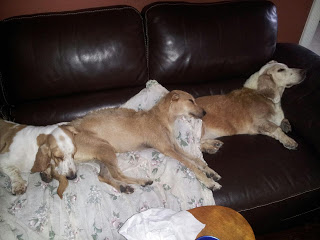 We left on a Monday. By Saturday, a wonderful woman, Nelda, escorted our precious cargo from Cozumel. We met her at the airport. Cozzie just needed her shots and signature of the vet to get through customs.
We got Cozzie home on January 14th, and not even 2 weeks later, we were contacted by ABC Basset Rescue about Amarilla (renamed Fiona). We took Cozzie and our niece Rachel to Albany on February 5th to get our new girl.

We’ve added a kitten to the mix (we lost our 17 year old cat between getting each pup).

Thank you so much for showing interest in these girls lives. They are such a joy!!!  We love them!
Regards,