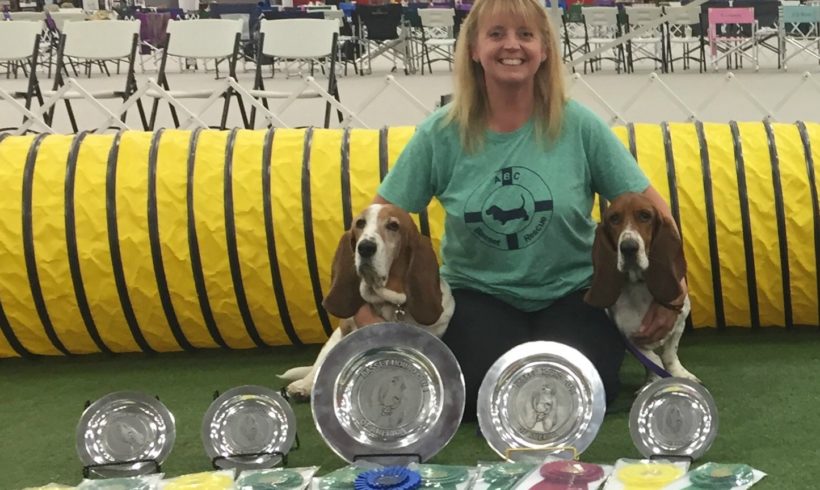 In 1995, my parents and I had a basset named Gunner. We dropped Gunner off at a friend of a friend’s house so they could use him to breed with their female. Little did we know that that would be the last time we’d see him. Gunner apparently slipped out of a door and was on the run for weeks. We tried everything to bring him home. But, we never did. From that day forward, I promised that I would help every homeless basset I could.

A few years later, I saw an ad in the classifieds for a new basset hound rescue. I called to see if Gunner ever came through their system, but he did not.  I did end up adopting a dog, Doc, from them with my husband, Don. Soon after that, I received a newsletter from ABC Basset Rescue looking for volunteers. So, I raised my hand! I started off doing home checks in the Buffalo area. At an ABC meeting, Gary Penny had asked if anyone would like to look into opening an online store for the rescue. I volunteered for that since my parents own their own store and I would have some retail experience from them on my side. I started off The Slobber Shoppe with 5 items back in 2002 and now The Slobber Shoppe is ABC’s biggest source of income with over 350 basset themed products. It is literally the biggest e-tailer of basset hound merchandise in the world!

When not helping the bassets, I do payroll for the Cheektowaga Police Department and also compete in agility with my bassets Diesel, Dazzle and my new guy, Flash Gordon. Diesel has taken me to the AKC Agility Invitational in Orlando, Florida twice to compete! Only the top 5 of each breed are invited. I’m proud to say we’ve represented rescue bassets twice!

My husband, Don, and I live in Cheektowaga, NY and we’ve adopted 8 bassets since we got married in 1999. Don is an airline pilot for Southwest so with him being gone so much, I have time to devote to my favorite hobby…being President of this AMAZING organization! When I started with ABC, we were bringing in 30-40 dogs per year, but now, we’ve grown to over 100 dogs per year we are saving! I’m proud to be a member of this group and lucky to work with such amazingly talented volunteers.