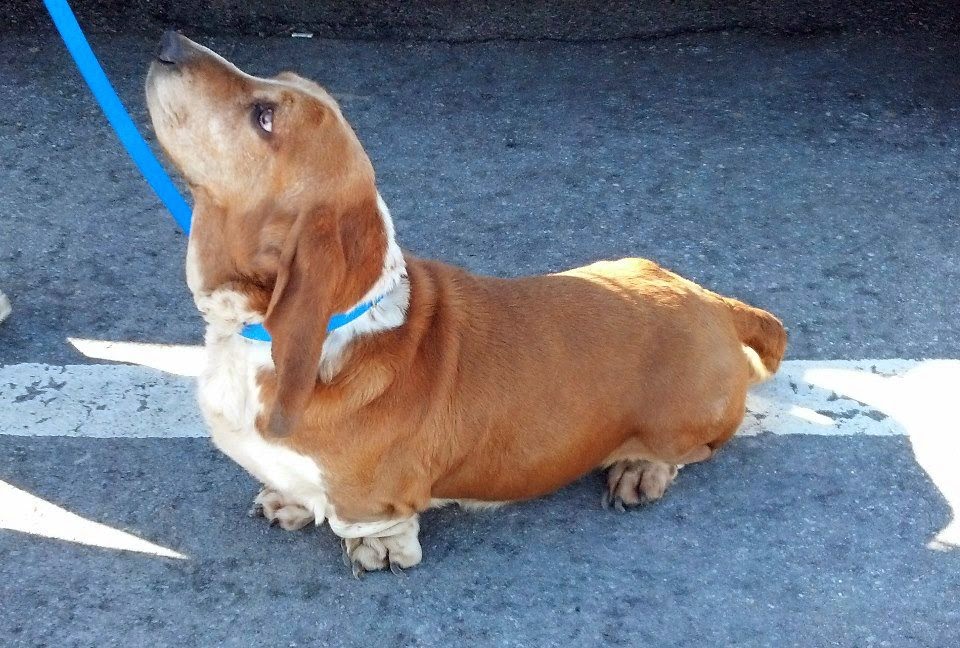 This week’s Perfect match Monday will make you smile and cry at the same time. It is one of the happiest and saddest stories we have ever shared here. This is the story of Winston. Winston was relinquished to ABC by his owner because his sister had become ill and they didn’t want to leave Winston outside all by himself when she was gone. His owner was so overwhelmed by grief over the loss that he claimed if we didn’t come pick up Winston he would have him euthanized with his sick sister. ABC stepped up and found a way to rescue him from this situation.
It was known that Winston was going to need a good amount of vet care since it had been some time since he had been to the vet. He would also require a large amount of training as he had lived outside since he was 11 months old. The road ahead was going to be long, but he was in good hands.

During his transport, the included picture was taken and it was posted right here on the ABC Facebook page. A buzz like no other ensued. He was such a “low-rider” (or a watermelon with d-cell batteries as it was termed) that everyone fell in love with him, especially ABC’s own Laura Johnson. She was looking for the big, squishy type basset hound to add to her family and she knew right away that Winston was her guy. Her comment on that Facebook post was “omg, omg, omg, omg”. A month in foster care and he traveled to the Johnson’s house where he would continue his medical care and training.

Laura and her family were “over the moon” in adopting Winston, who they learned was a gentle and kind hound. How could they not love him? Two months after they adopted Winston, he became ill. His neck was swollen and they could tell he was sick. The vet diagnosed him with Stage 4 lymphoma. It was inoperable and systemic. They got the worst news when the vet continued to tell them that he would only be with them for 2-6 more months. Laura wanted Winston to spend his remaining time getting all of the love and attention that he should have gotten over the past 9 years of his life. She made it her own personal mission.

Yesterday, Winston made his way to the Rainbow Bridge with the Johnson Family by his side. Laura announced this sad news by saying “Goodbye to the sweetest dog I have ever been blessed to have cared for”. The Johnson Family will continue to have the love and support of us here at ABC Basset Rescue as they grieve for the loss of their beloved Winston. We celebrate all that they have done to give Winston (and their other hounds) an amazing life as well as all they do to continue to help ABC.

We couldn’t finish this Perfect Match Monday without sharing something that we know Laura would want everyone to be reminded of…from our blog on June 17, 2013 (http://nybasset.blogspot.com/2013/06/winstons-story.html?m=0) in Laura’s own words….”Many people would say that this is so unfair and so sad  Many people don’t get involved in rescues for this reason because “I’d want to keep them all” or “I just couldn’t take seeing the suffering” and many other excuses along those lines. I am going to tell you right now, I think that is a cop out. If you ever needed an excuse to help, to be a foster home, this is why. I may have Winston for only a few more months, but those months are going to be the best of his life. He is going to be able to leave this world KNOWING I loved him. I will make him feel like the prince he is until he takes his last breath. Until the human race stops abusing animals, it is the DUTY of those that love them to make it right. It is heartbreaking, it is sad but the triumphs of success make it worth it. Even though this is a sad thing that is happening, I feel it is a total win. Winston got the chance to be loved, appreciated and spoiled. He was offered to opportunity to sleep on a couch, eat when he wanted as much as he wanted, be warm in the winter and cool in the summer, and to be free of fleas and other parasites. As his Mom, that is my job. So the next time you find yourself looking away or making excuses, don’t. Foster a dog, do some transporting, buy basset crap from the Slobber Shoppe, or make a donation. Get involved and help stop the rising tide of animal abuse and neglect. Do it for Winston, and all the dogs like him so that they might have the chance to sleep on a couch and know love. So many don’t get that chance.”

Winston did just that…he left this world knowing he was loved, happy that he had some lazy time on the couch, as much food as he wanted and a life he deserved. Is there really anything more to say? Oh yes…For that, we think this was a Perfect Match.
First posted 9/16/13