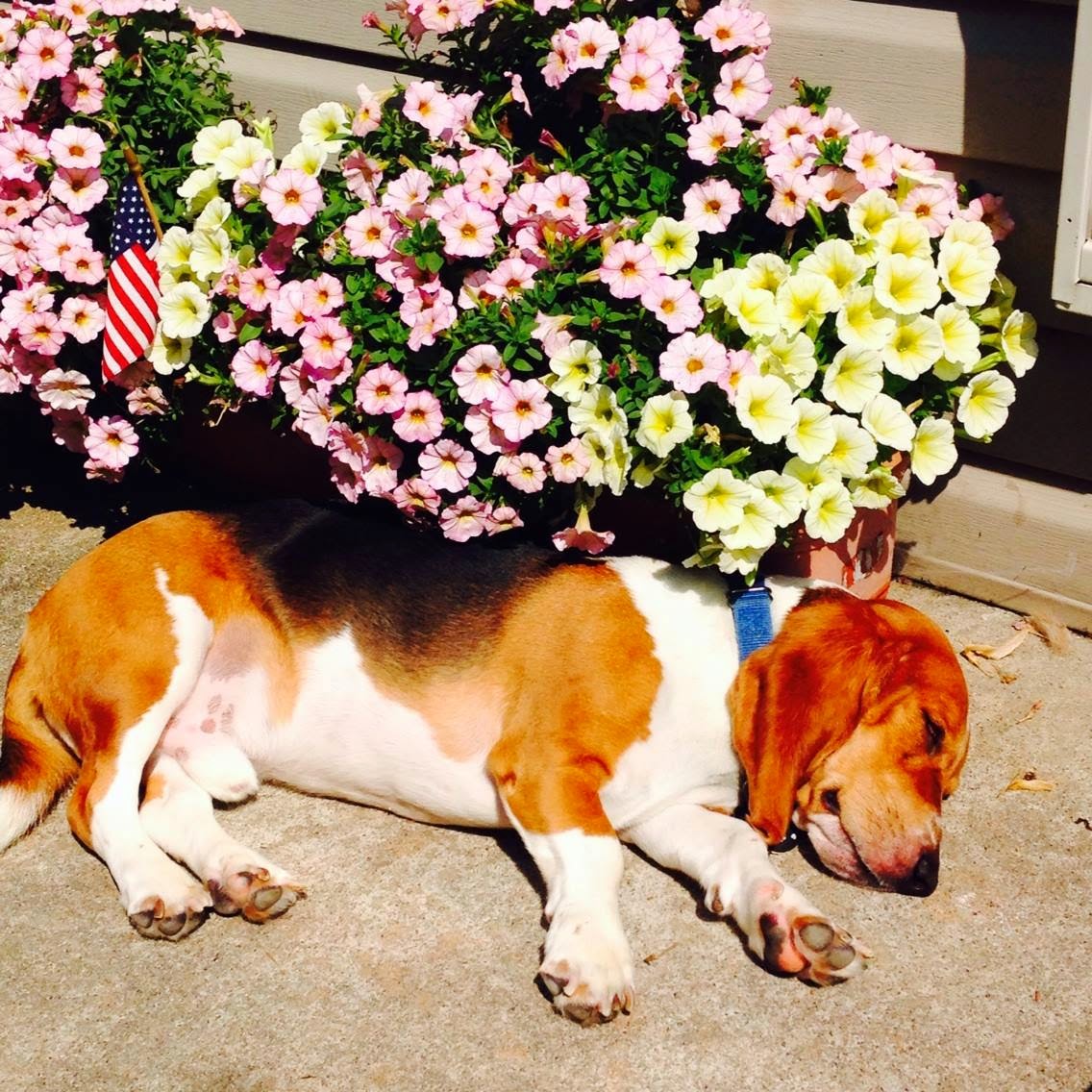 This week’s Perfect Match Monday story is one that is very near and dear to my heart. Remus (or Peanut, as I call him) was one of my favorite foster dogs. I have asked Remus’s dad and my friend, Charlie, to help me write this week’s story. So, this is the story of Remus.

Here is my part of the story: In June 2012, ABC got a call to help rescue 5 dogs from Texas. These dogs ended up at the Humane Society as their breeder was done with them and just let them out to find their own way. Each dog in the group had severe medical issues. Most of them were Heartworm positive, had worms and had serious skin conditions. Remus was one of the two young bassets in this group of dogs. I was given information on an adopter that was waiting to hear from me about Remus. It seemed that Remus was already “spoken for”. I got in touch with Charlie and throughout the whole process of getting Remus well enough to be adopted, I had contact with him. I would send pictures and updates and funny stories. It was a very unique experience for both of us, but it was great to be assured that my foster had a home to go to.

Soon after I got Remus home, I started calling him Peanut. He was so little for a basset hound and the name just fit for me. I made sure to get Remus to a vet as soon as I could. I informed them of all of the issues that this group of bassets had. We were very nervous that he had
heartworm and since he already had a home waiting patiently it was important that he get the green light to be transported.

A week later I got a phone call from the vet saying that Remus was heartworm negative. I literally yelled “woohoo” out loud I was so excited. The girl at the vet didn’t understand why I was so excited, but he was one of two of this group of dogs that didn’t have heartworms. I found out later that they ran the test three times to make sure it was negative. My peanut could go to his forever home…just as soon as he kicked the cough he had. Charlie was thrilled to hear that Remus was going to be ready to travel in a couple weeks.

Laura (our adoption coordinator at the time) and I had such a close relationship with Charlie that we decided to make plans to meet Charlie half way from his town. It was a 4 ½ hour drive for us, but it was worth it to meet Charlie and see Remus off. I left Remus with Charlie and I did everything I could to not cry like a baby. Here is Charlie’s part of the story: My first concern with adopting Remus was how he would get along with my Basset Hound Holly. When I brought him home, they got along great; that is until Holly started to realize Remus wasn’t leaving. There was no food aggression, but there was some jealousy over toys and my attention. Holly would avoid Remus and look at me as if to say “Why is he still here?” Remus, on the other hand would brush up against Holly and look for her attention. Eventually Holly gave in and they have been best friends ever since.

It seems to me like Remus was a part of the family much longer than only a year. My best friend’s son Jesse is three years old and obsessed with Remus. Jesse will hug him, and smother him with love as young children do; and Remus happily receives it. Jesse also often reminds me as he plays with Remus “this is my dog.” To which I reply “oh yea? I thought he was my dog.” To which Jesse says “No. Remus is my dog; Holly is your dog.” Remus also gets along with his doggie cousins in the family as well as the doggie neighbors where we live. I think one of Remus’ best qualities is his ability to adapt and keep a playful personality in spite of what he has been through before coming to ABC. It is amazing just how much love he has to giveand is eager to receive. For that, we think this is a Perfect Match.
First Posted 12/23/13