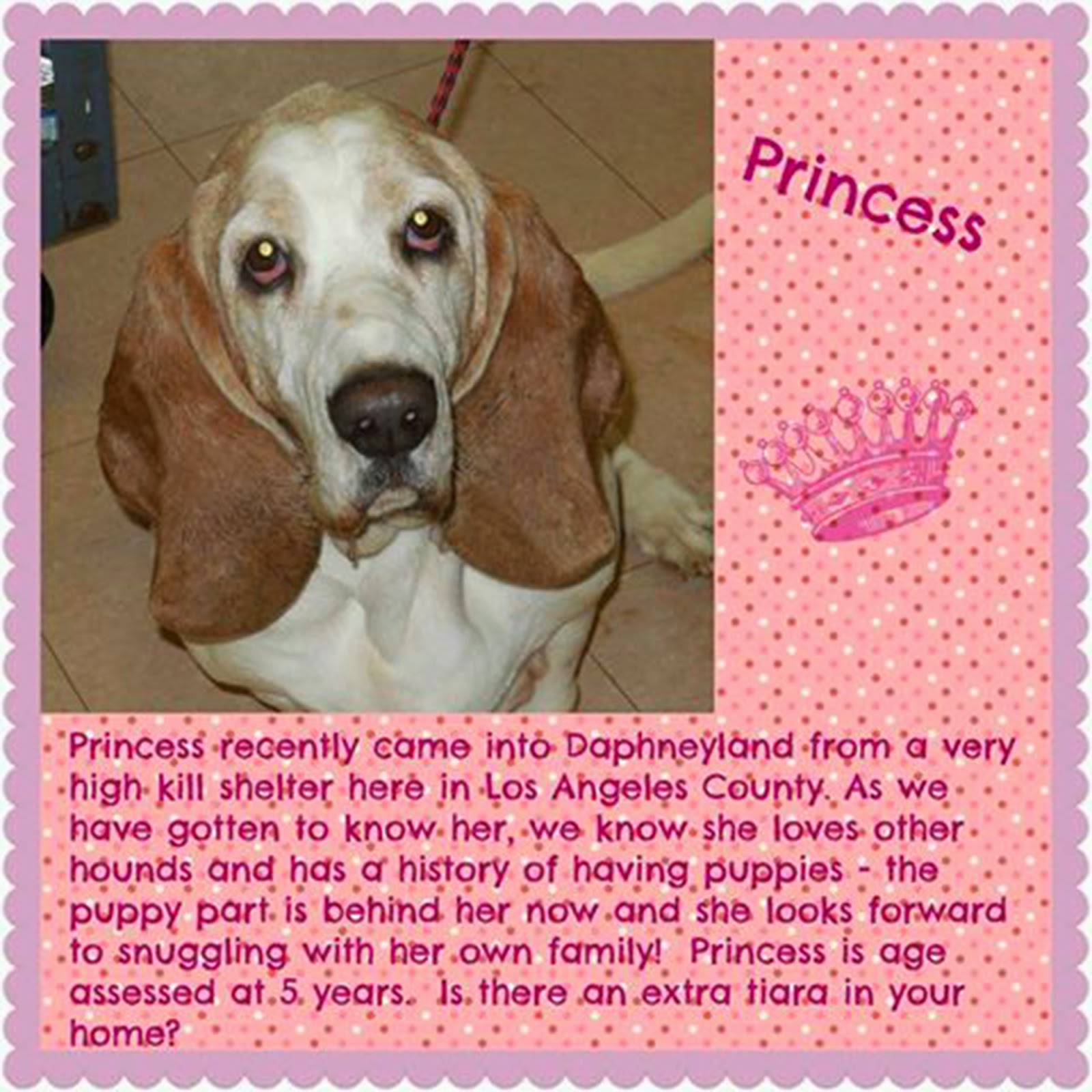 Last week we did not have a Perfect Match Monday story because we were gearing up to bring you one of the most amazing stories from ABC’s recent past. This story is so big that it will be a three-week series here on our Facebook page, so please make sure you come back the next two weeks
to continue reading the whole story. This is the story of Princess, Bubba and Thomas.

We are going to start this story by introducing Peter and Maureen Rundle. The Rundles came to ABC to adopt a basset hound, but they didn’t feel it was right to have just one hound. They wanted to adopt two hounds so that they could keep each other company at all times. Two bassets are better
than one!! ABC doesn’t see many adopters that want a pair of hounds and didn’t have a pair available for adoption. They sat on the adoption list waiting patiently to find the right hounds for them.

When the 19 bassets came into ABC from Daphneyland in December of 2013 our volunteers contacted The Rundles to find that they were available to attend the adoption event that was being held in Buffalo. There weren’t any dogs that were bonded in the bunch, although most of the bassets that came in had lived and played together at the ranch in California. Peter and Maureen met each of the bassets that we available for adoption that day.
Princess stood out to them. She was sweet, a little older and had such a beautiful face. They just couldn’t resist her. Princess found her way to Dahneyland when she landed herself in a high kill shelter in Los Angeles County. They could tell that she had had several litters of puppies in
her 5 years. She may have been a breeding basset at one point in her life. The Rundles quickly laid claim to Princess and started to look for a brother or sister for her at the adoption event.

That’s when they met “the big man”…Bubba. He was so sweet, cuddly and they fell in love with him. When Bubba ended up in a shelter in California, he was extremely overweight. He was so overweight that the shelter thought he had leg issues because he couldn’t support himself. Once he got to
Dahneyland he started to lose some weight and arriving in New York he was down almost 19 lbs.

They liked both bassets so much they were ready to adopt both Princess and Bubba that day. Peter and Maureen were a little concerned about whether the two bassets would get along together. They seemed fine at the adoption event, but what happens when they all get home? They were willing to
take the time and the chance to find out. Princess and Bubba became Rundles that day and after 24 hours they were getting along great.

Princess, who was now Bella short for Isabella, and Bubba quickly became a true part of the Rundle family. Bella had some issues with arthritis in her back soon after her adoption. Her vet thought she was sore from all the travelling she did to get up to New York. She hasn’t had any pain since then. Bubba, well Bubba continued to lose weight and even though he would let Bella know when she should stay away from his food dish, he was doing well with his weight loss plan. Peter even thought that he enjoyed their daily walks “once in awhile” where Bella loved walking the neighborhood.

In March of 2014, we got some terrible news about Bubba. He wasn’t feeling well for a couple of weeks and when the Rundles took him to the vet they discovered he had terminal cancer. The vet gave Bubba only a few weeks to live. They were heart broken that they weren’t going to get very much time with their Bubba. It was a very hard time for them.

When Peter and Maureen adopted Bella and Bubba they wanted two bassets to keep each other company and they realized that they didn’t want Bella to be alone for any length of time. They didn’t want her heartbreak at the loss of Bubba to be too hard for her; even if it was going to be hard on them. The Rundles also wanted all three hounds to have some time together. That is when Maureen contacted ABC to find another basset for their family.

When ABC received Maureen’s message, ABC’s Intake Coordinator, John Morrison was working on an intake of bassets from North Carolina. He talked with Peter to find out what would be a good fit for their family. They talked about several different basset hounds that were coming in and then John suggested Thomas to them. Thomas had caught John’s eye. He was a basset mix (we think basset and daushund) and is as cute they come. He was in a foster home in North Carolina. He didn’t have a rescue and he didn’t have a forever home, so he was on his was to find a new home in New York.

John sent The Rundles a picture of Thomas’s cute face and they once again fell in love. They decided that they would adopt him without even meeting him. When he got to New York a couple of weeks later, The Morrison’s picked him up and drove him to meet Peter and Maureen. They felt like it was the least they could do for this amazing family.

Thomas and Bella bonded immediately. They became the best of friends and started going everywhere together. Where there’s one…you will find the other. Thomas turned out to be a great dog for their family and even got to spend some quality time with Bubba. The whole family packed up and enjoyed a day at ABC’s Spring Basset Blast in April (you may have seen them there). They ran
around together with all the other ABC alumni.

Now, as a story like this is being written…it also changes…life doesn’t stop. After our first installment of this story we got the saddest news ever. Bubba had passed on to the Rainbow Bridge leaving Bella, Thomas and The Rundles behind. Peter tells us that they were very lucky to have Bubba survive months after his diagnosis. He got to enjoy the spring weather out in their yard and stand guard over the pool deck. They also feel blessed that Thomas is now part of their family and Bella can enjoy her best dog friend and brother.

The Rundles are an amazing family who love their basset hounds. They’ve given three ABC basset hounds a good home and a great new lease on life. For that, we think this is a Perfect Match…times three.