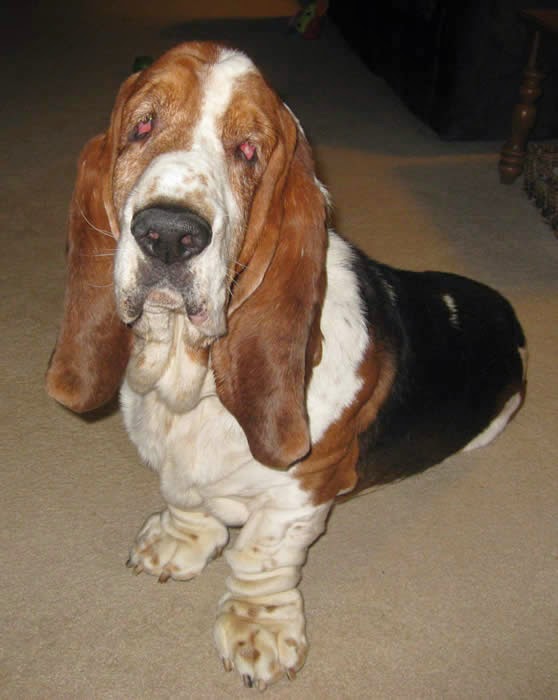 Today’s Perfect Match Monday is an amazing love story between an amazing basset and a great ABC volunteer. This is the story of Jeb. Jeb was an owner relinquish to Carolina Basset Rescue in NC. He made his way up to NY in July of 2012. He had fleas, an ear infection and needed all of his vaccinations updated upon arrival, but the biggest thing was that his eyelids were turning. They treated it with eye drops, but after  further vet examination in NY they found that he needed an upper eyelid entropy. He ended up having 1 cm of his upper eyelids removed before any damage was done to his eyes. Due to his “eyelift”, he has to have eye drops daily for the rest of his life.

Dana was walking around the community yard sale in her neighborhood and stumbled upon a house with the bright red ABC Basset Rescue
van in the driveway. She had decided that she wanted to help the rescue, so she walked up the driveway to see what she could do. She met ABC’s very own President, Shelly Gordon, who encouraged Dana to foster. Dana agreed to try to foster for ABC (today she is ABC’s secretary as well).
Dana picked up Jeb from a volunteer who brought him up to NY with her. When she first brought Jeb home, he didn’t move his tail for the
whole first week. She thought that maybe his tail was broken, but after the vet looked at it, there was nothing apparently wrong with it. Dana gave him another week, moving his tail for him when it was in the way, and after a whole other week, he finally started wagging it. It seems it wasn’t broken at all, but he was so sad that his family gave him up that he just wasn’t happy enough to wag his tail during the first couple of weeks at Dana’s house.
Dana tells us that “she’s not sure when I fell for Jeb”, but from the first night she had him in her house, she would put him to bed and
kiss him Good Night and wonder how she would ever give him up. Well, she decided that she just couldn’t bear to let him leave her house and “foster
failed” after only a couple of months having him.

Jeb is Dana’s perfect shadow and follows her everywhere she goes. He doesn’t really like to share her with other fosters, so she can only take on a foster for a short period of time. He loves his nightly walks around the neighborhood and truly loves to play fetch. Dana and Jeb found each other like many of us have found our bassets. Volunteering and fostering has some benefits that we don’t always realize right away. Some times you find your true love in a foster and can look back and say, “Adopting him was the best decision of my life!!” For that, we think this is a Perfect Match.
First posted 8/12/13