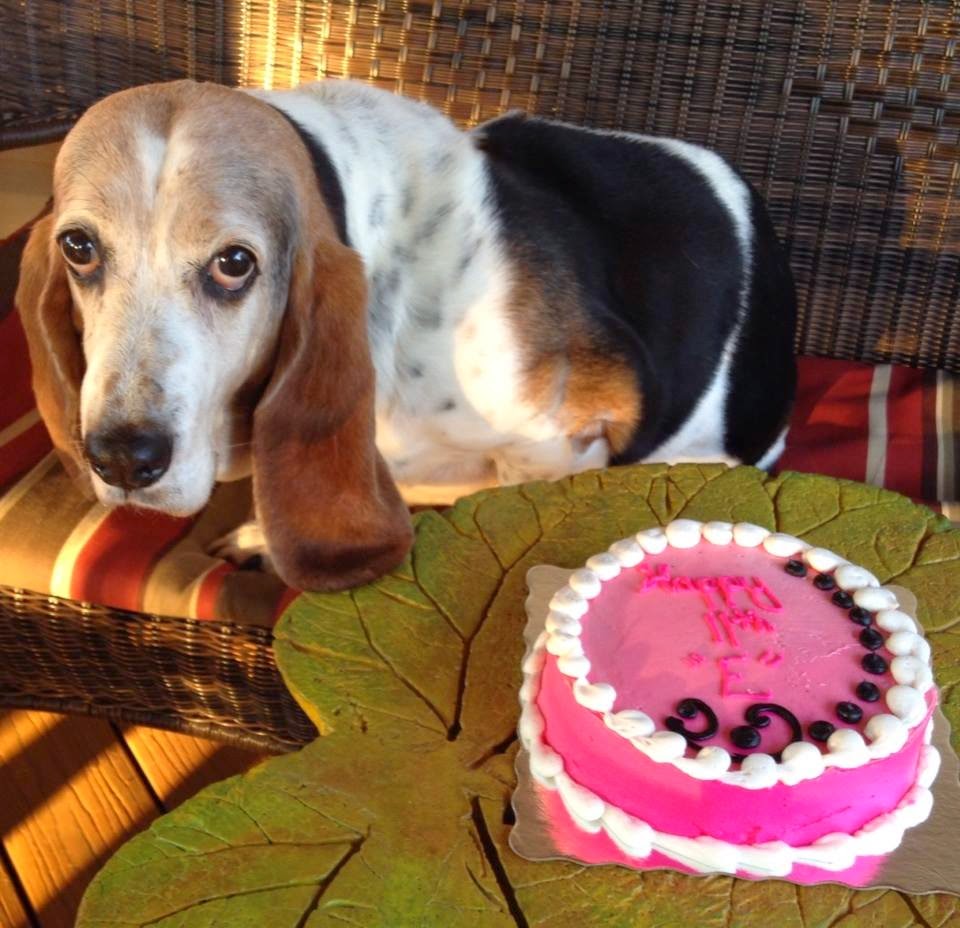 This week’s Perfect Match Monday is the story of a basset that spent most of her life living outside and now enjoys “the good life” while helping others. This is the story of Eeyore.

In 2008, ABC took in two 6 month old puppies named Diesel and Andi. Diesel and Andi’s new owner couldn’t housebreak the two puppies that
they had bought from a backyard breeder and relinquished the dogs to ABC. The Gordon’s fostered Diesel and foster failed with him (Diesel’s Perfect Match Monday was posted last January).

Shortly after they adopted Diesel, an ABC supporter got information on a basset that was being sold in the paper. When Shelly got a picture and information on the dog she realized that Eeyore was Diesel’s mother. She called the breeder and told him that two of Eeyore’s puppies had
been relinquished to ABC. She explained that she had adopted Diesel. She then asked him to relinquish Eeyore to ABC. When he refused to turn her over without a payment of $300 she argued with him, but he wouldn’t budge. At that time, Eeyore was almost 5 years old. A few months later she saw his ad again in the  paper. She contacted him again and her gave her the same argument. In July, the breeder called her and told her to come get Eeyore.

Shelly and Don went to pick Eeyore up and were devastated by the conditions that she was living in. Eeyore was being kept out in the far field of the breeder’s house. The only thing keeping her from the elements was a plastic doghouse. She had a bowl of yellow water that had obviously not been
changed in awhile. The grass was so high in and around her fenced in area that it was hard to even see her as they walked up. She had been bred so many times  and not cared for, but she met Shelly at the fence.

They took her home and Shelly gave her a bath in their backyard. Shelly thought that Eeyore would fight her, but she stood there letting Shelly bathe all of the filth off of her. When Shelly was toweling her off, Eeyore looked at her with those big brown eyes as if to say “Thank you” and that is when Shelly knew she wasn’t going anywhere but to her couch.

The very next week they celebrated Eeyore’s 5th birthday with a cake and a birthday party. They were sure she had never celebrated anything and
certainly not her birthday. She had quickly grown on them. She was loving and cuddly and enjoyed much time with Diesel and their other bassets.

Diesel and the Gordon’s other basset Duke were both doing agility. Shelly wanted to have some “mommy and me time” with Eeyore. She took
her to do the Canine Good Citizen test and she “killed it”. From there they got her into the SPCA Paws Love Program and ever since then Eeyore has been visiting a nursing home in their area every week. She brings joys to all of the residences and knows the patients who need some extra special time with her.

This past weekend, Eeyore lead the way throughout “her” nursing home as all of the bassets (and their owners) followed behind to visit
with as many of the residences as they could during ABC’s Breakfast with Bassets. When Shelly is given praise for her work at the nursing home she
humbly replies “Eeyore does all the work…I’m just her ride”. For that, we think this is a Perfect Match.