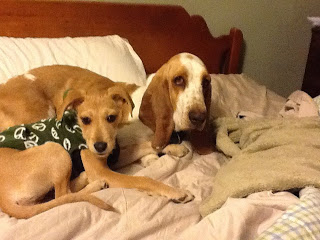 “The Texas Five” sounds like a gang right out of an old time western movie, but for ABC Basset Rescue it means something entirely different.
One year ago today, five basset hounds from Texas arrived in Buffalo, NY. A large “breeder” in Texas had gotten ill and 31 basset hounds needed new homes immediately. ABC took on the task of getting five of these dogs from Texas to New York.

It was a long trip to be made by volunteers during a busy holiday season, but Amarilla, Abilene, Dallas, Houston and Austin (plus, Jolly who bummed a ride from Ohio) arrived safe and sound at Camp Bow Wow in Tonawanda, NY. The Buffalo News and Channel 4 ran stories of these dogs journey
and arrival. Everyone in ABC and people from all over the country were watching and waiting for these five bassets to arrive safe and sound.

All five dogs were under weight, skiddish, flea infested and just out of spay/neuter surgeries (not to mention eye surgery for Austin).  These hounds had never left their cages and it was unlikely that they had ever been inside an actual house. We tend to not think about the basics in life for ourselves…those things we take for granted, but I believe it is the same for our dogs. Every single thing was a new experience for these guys: car rides, stairs, going outside to go to the bathroom, a couch to sleep on, a human around to take care of them all the time, a healthy/consistent diet, treats, toys, walking on a leash, room to roam, cold WNY weather and most importantly trust.

The stories of each of these hounds are so amazing that I want to share them with as many people as possible. The common thread is each story is patience, love and the most devotion I have ever seen in any situation.

Abilene is such a formal name, so it seems everyone just calls her Abbie these day. Her mom, Dee, told me that the first month was the most challenging. Abbie would sit on the futon all day while Dee was at work and would just wait. She wouldn’t interact with the 3 other bassets in the
house either. She wouldn’t eat, drink or go out to the bathroom without coaxing. After that first month Abbie’s new sister, Gracie, pulled her out of
her shell little by little every day. Gracie taught her to eat but only if their bowls were next to each other. That evolved into Abbie eating with the
rest of her siblings and gaining some much needed weight (up to 45 lbs as of now). She has learned to use a doggie door, chases outside with Gracie and tug of war inside. Abbie has made friends with Dee’s neighbor and runs outside when she gets home for her treats. She has come a long way since last year, but is still taking baby steps to accept men in her life and to socialize with other dogs and people outside of her immediate family.

Today, Abbie gets to sleep in a warm bed with her mommy, follow her all around the house and play with her siblings. Nothing could be better!!

Dallas under the tree…the best gift a family could ever get!!

Although, Dallas could be assumed to be a boys name this Dallas is defiantly a lady. Over the last year, Dallas has become very attached to her human siblings. Her mom, Ashley, has told me that she is best friends with their 4 year old daughter. She also follows her mom around like a shadow.
She also seems to be doing fine with the most recent snowfall. Of course, she has help from her brothers who go out into the snow and make a path for her.

A quote from Houston’s mom: “Merry Christmas, Houston…you have given us more joy this year than we could ever repay.”

Amarilla (Fiona) and her BFF Cozzie enjoying a comfy bed. Well, Amarilla has had a name change to Fiona, since her mom Karen felt like she was calling her an armadillo when she called for her. After the terrifying ride home to Staten Island, Fiona, found that she had 3 doggies siblings (Ethel, Pumper and Cozzie) and a couple of kitty friends. She took to them all right away and found her bff in Cozzie, who Karen had just rescued from Mexico. She learned the doggie door by following the other bassets and Cozzie out into the yard. She loves to play outside. Her favorite thing is to
sleep with her head on Karen’s pillow while she sleeps…and she snores really loudly. She will bark while Karen is fixing the food as to say “Hurry up”. Fiona still has alot issues with men and is scared of her dad. She will pee if he goes near her and will run and hide from him if she can. They are continuing to work on those issues going into the new year.  filled our lives with joy!! We are so thankful to ABC Basset Rescue for rescuing her and allowing us to have her!!”

Austin enjoying a toy on “his” couch. Of the five hounds that arrived from Texas, it seems that Austin had the roughest time adjusting to his new life. He was terrified of his new family and surroundings. His mom, Tracey, told me that he wouldn’t sleep if they were around and when they tried to approach him he would lose bowel and bladder control. They had to pick him up and carry him everywhere. Going out to the bathroom was a challenge….getting him to go out and then back in was just too much for poor Austin. Not to mention eating his dog food on a regular basis. Tracey has made homemade soup to mix with his food, so that he has gained 10 lbs over the last 7 months. Only after he got out of his collar one day and was chased down, did things start to change for Austin and his new family. He started to play with his basset sister, Caley, even if the humans were in the room. Then he started to play with them too. He barked for the first time even. Then in August, after the family moved, he learned that the couch was the place for him. He jumps up to greet his mom and even howls when the family leaves. He has learned that tummy rubs are free and will flip over
to get them.

Austin has come a very long way since last year, but still needs time to not be terrified of strangers and be able to go out into the world without fear.

Every day we read news articles about horrific things happening in the world around us. Today, I was very pleased and excited to share a happy story with you. Five basset hounds, find five happy homes and are way better off then when they entered this world.

A lot went into rescuing “The Texas Five”, as does rescuing every basset that ABC takes in and finds a forever home for. Volunteers are a precious few. They are amazing people who give up their time, their homes and a lot of their energy for these hounds. ABC couldn’t survive without a group of
people who want to help…no matter what. Becoming a volunteer is easy and what you get in return are stories like this one…pictures of happy, healthy hounds in homes that cherish them.

ABC Basset Rescue would not be able to do the things they do without donations. A transport, vet visit and other things to help these dogs find homes are not free. We are a non-for-profit organization, so donations are the only thing that keeps us doing these amazing things. In the last couple of
weeks, ABC rolled out its VIP program and a monthly donation to help the hounds only has to be a small amount out of your pocket. It’s even tax deductible.

Personally, without seeing the Buffalo news article on “The Texas Five”, I would never have found my Cooper at the adoption event that was
held a couple of weeks later. I also would never have decided to foster and become a volunteer for ABC. Since January, John and I have adopted three bassets and fostered six hounds. John even jumped in the ring as ABC’s new intake coordinator. All because of five homeless hounds and an organization who does what ever it takes to find good homes for homeless bassets.

It is funny to think that one event last January could change so many lives, but in my world, basset hounds make interesting things happen every day. 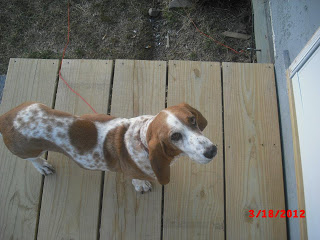 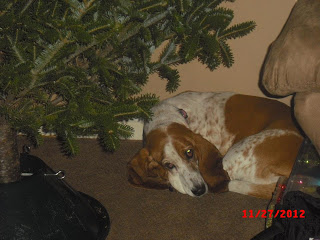 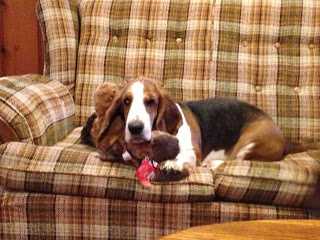