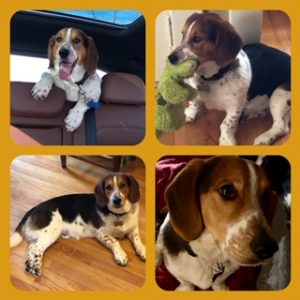 Nick is good with other dogs. He chases his foster family’s cat around, but only out of curiosity. Nick loves, loves, loves toys. He loves them so much that he will demolish a stuffed toy quickly. Nick loves squeaky toys, to play tug of war with toys, and basically just loves toys. Nick is still a puppy and likes to chew. Nick will need to be crated for his own safety, when someone is not around to supervise him. Nick will need lots of patience and training by his future family. Nick would prefer a physically fenced in yard so that he can run off some of his puppy energy and follow his nose outside. He would also love to have another canine companion in the home. Nick is going to be fostered in Canandaigua, NY.

Update: 2/8: Nick is a very active, friendly, and curious boy. He is a sweet, loving dog, that needs obedience training, He is mostly housebroken, but will go in the house if overly excited or if you take too long to get your coat on. He is extremely curious and investigates everything. He has lots of energy and he would be perfect for a house with kids who want to play with him. He likes to chase the cat. He isn’t aggressive , but the cat wants nothing to do with him He still likes to chew, and needs to be supervised because he WILL pick up something he shouldn’t have. I think this may pass as he gets older and better trained. I see no aggression at all – everything e does is out of curiosity or playfulness. He sleeps in a crate and goes to sleep after all the lights are out. Until then, he whines a little. When I need to go out of the house he stays in the crate as
well. I’m told that he barks for a little while then settles down.