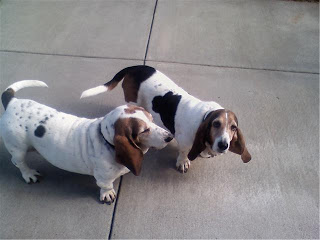 Two years ago, ABC took in a basset named Molly. Molly lived with her basset brother Henry since she was a little girl. The owners kept Henry….but it was only a matter of time before Henry was turned in too. Molly and Henry were in separate foster homes and a wonderful family offered to adopt BOTH Molly and Henry so they would be together again. The reunion was amazing! Henry’s tail was moving so fast when he saw his sister! When Molly went into the van, Henry followed and jumped in, never wanting to be separated from his sis again.
Two years later, this family who reunited them, now are giving them up.
Molly and Henry are very sweet and loving members of the family. They are a bonded pair that act somewhat like a married couple. They are housebroken.
Henry is a cuddly little man who is aproximately 10 years old. He enjoys cuddling up with his human members of the family and telling you all about his day when you come home. He is very laid back and loves his bed.
Molly is a very sweet girl who just turned 9. She loves to give kisses and is a bit of a velcro hound. Molly would do best with older, calm children as fast movements and loud noises scare her.
Both Molly and Henry are playful, although Henry has slowed down a bit. They love all the petting and the cuddles they can get. They do get along with other dogs, but Henry does not want to be bothered by very young dogs or puppies. Molly’s right ear requires frequent cleaning and perscription drops and is a very good girl about her ear care. The vet said her ear looked good at her last check up. Henry requires a little extra fiber in his diet and gets metamucil. He does have some fatty tumors along his ribs, they don’t bother him or cause him pain.
Would you open your heart and home to a pair of bonded seniors who want to live out their remaining years together?
If you are interested or want more information, please contact adoption coordinator, Tom Rodwell at trodwell@clearwire.net
Accessibility by WAH
Text Us