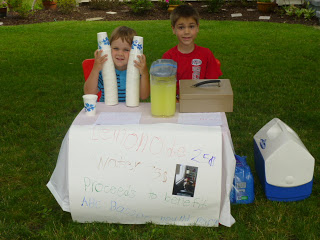 Late June, Jamie set up a lemonade stand on their street during the Roycroft Festival in East Aurora. Jamie’s mom, Lori, said that he made a sign for his stand and it read “Lemonade $.25. My dog just died.” So, his mom said “let’s make another one.” Their dad, Andy, offered extra incentive for their sales. He said he would match the profit they made that day.

$.25 sales of lemonade and $.75 bottles of water were flying off the table. People choosing lemonade over the water giving Jamie $1 and telling him to keep the change. Being smart in math like he is, Jamie would then offer people “take a bottle of water too then, it’s only $.75”. After a few hours of sales, and lots of lemonade later. The boys raked up $72.80 in sales! Their dad, Andy, gave them another $37.20 to total $110.00!!

On July 7th, the boys, their parents and their basset hound, Macy, dropped off their lemonade earnings to ABC Basset Hound Rescue President, Shelly Gordon & Secretary Dana Hrycko. The boys couldn’t believe there were 6 bassets in one yard! 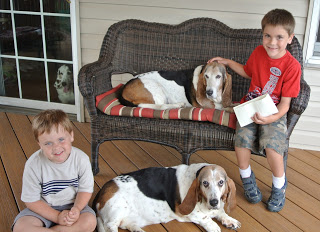 I asked Jamie if he would do it again next year. He shook his head with excitement and said “YES!” I told him that ABC would come with a tent, banners, the ABC van and some bassets. And then Jamie said, “Even Duke can come next year.”

When Jamie handed me the money, he told me specifically what he wanted the money to go for…”I want the money to help a sick dog get better.” Rest assured, Jamie & Mikey, your money will help a now homeless basset hound get healthy and we will find him or her the perfect forever family.

These 2 boys spent their weekend raising money for homeless basset hounds, let’s continue their effort and show these boys that their weekend was time well spent! Please consider donating in Gisele’s memory for Jamie & Mikey.