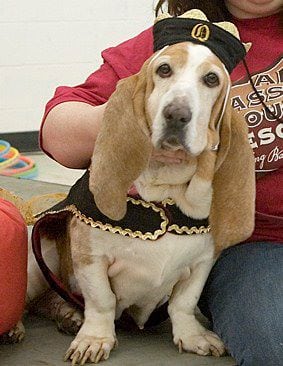 Those of us involved in rescue often hear, “It takes a village”. The “villagers” of ABC have supported a forever foster, Miss Holly for six years. This is Holly’s story.

Holly’s story with ABC began in June 2012. The intake coordinator at that time was Sommer Slavin. Sommer worked with North TX Basset Hound Rescue to get Holly and several other bassets pulled from a TX shelter and transported to ABC in NY. 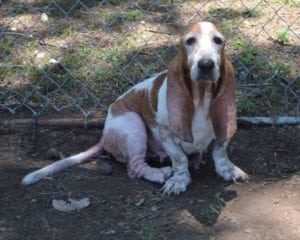 When the group arrived in NY, Holly was in extremely poor condition. She was severely underweight, was heartworm +, had rotten teeth, yeast infection in both ears and all over her body suffered from chronic UTI, gastritis, mass in her intestines, thickened lining of her lungs and an enlarged liver. The Vet didn’t expect her to live very long. As sick as Holly was, she was a total sweetheart. It was decided that Holly would be placed in foster care as a forever foster/hospice dog. Holly went to a loving foster home and slowly improved. Her medical problems were complex and chronic, at 10 years old she was sensitive to the medications and over the next 4 years, she would improve only to have another issue come up. Through all of this, Holly loved life and just rolled with whatever life threw at her.

In May 2016, Holly needed a new foster home and came to live with me and my menagerie of chickens, cats and bassets. The vet discovered Holly had cardiac changes, abnormal heart rhythm and dangerously high blood pressure. Holly responded to her medication and did quite well. She came into my home as if she had always lived here and claimed my youngest hound, Dudley as her best pal and playmate. 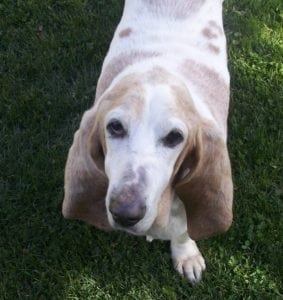 Holly in her forever foster home 2018

Holly was one of the sweetest dogs I’ve ever known. True to basset form she could be exasperatingly stubborn but seemed to enjoy the game. Holly could be aloof, she was my constant shadow and couch buddy when she wanted to snuggle. She hated the camera and would make a quick exit if I tried to sneak a few pictures…I have more shots of Holly’s backside than I’d care to admit to. Holly discovered the treasures of the vegetable garden and was a regular visitor to the tomato and green bean patch, she even raided the raspberries. Holly’s favorite pastime was watching the chicken flock with her pal, Dudley and would frequently be seen nose to ground tracking the many rabbits that passed through the yard. She and Dudley would sing together whenever the fire alarm went off. Holly hated the snow and cold but seemed to enjoy the attention when I bundled her up in her coat and snood on really cold days. She would waste no time for a quick dash out and came right back in to claim the spot closest to the fire.

Holly did well through this early spring but was having flare-ups of her gastritis, then in early June she became quite ill, spent a couple of days in the hospital. I went to see her daily and on her last day she crawled onto my lap and gave me “the look”, she was fading and tired in pain. She was ready to leave this world. As Holly lay cradled in my arms she gave me the last kiss as she was helped to the bridge. Today she came home. Holly was 16 years old when she passed.
Holly ATB June 7, 2018

To the ABC Villagers:

Because of you, a sweet, quirky little basset hound from “Somewhere, TX” lived the best six years of her life. Holly was cared for, never hungry or thirsty, lived in a home as part of her family and she was loved. Because of you, Holly lived and lived well. Thank you to everyone who had a hand in Holly’s rescue, care and support over the last six years.