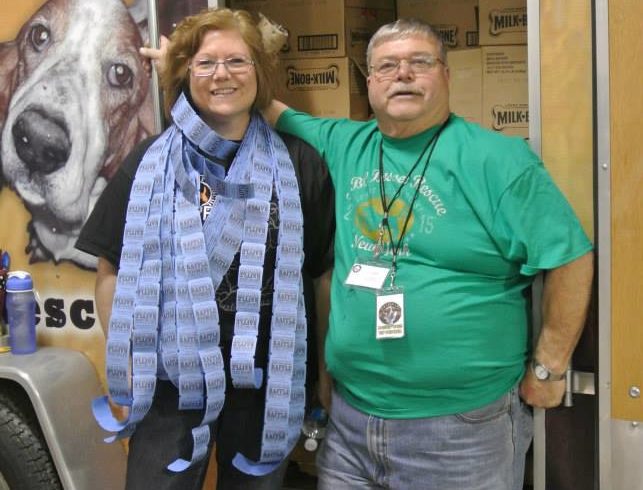 It was 2001, there wasn’t a rescue for basset hounds in New York. The one that covered New York was defunct….We adopted our 4 bassets from that rescue and were volunteers. My wife and I contacted volunteers from the defunct rescue to see if others were interested in forming a new basset rescue…….the rest is history.

A meeting was set up in Batavia, NY bringing about 20 previous rescue volunteers together and a decision was made to start a new basset hound rescue for NYS. Many names and ideas were shared however after many hours “All Basset Cherished Basset Hound Rescue” (ABC) was born. We became Incorporated from the state along with our 501C3, non-profit, thanks to Tom Rodwell!

Tom and I Co-Chaired and formed the organization structure and secured insurance for everyone’s protection. In the early days the intake of a basset into ABC was determined by the money the few volunteers contributed. Yes, it was a tough start.

ABC’s first adoption was April 2001. ABC was a legal rescue and recognized by New York…with what we had been through with the other rescue, this was big!

Taking lead with ABC was natural for me, serving 35 years as volunteer firemen. Advancing through ranks; serving 4 years as Chief, 15 years as fire district Commissioner with 12 years as Chairman. Commissioner is an elected public position overseeing district tax money and operations of the fire district. However, being a part of a structured organization and forming an organization from nothing was quite a challenge.

I served as ABC’s Chairmen from 2001 – 2012. ABC had made huge progress and it was time to pass the leadership to a person who was passionate about ABC with fresh ideas to lead ABC to the next level.  Our President Shelly Gordon was the right person. Today I am proud to be serving on the board of directors as well as treasurer under the leadership of Shelly.

I live in the Rochester area with my wife Kathy of 24 years and our 3 senior bassets. I retired from DuPont in 2003 with 30 years of service. Our family ran a small “Kettle Korn” business for 9 years selling in 2011. It has been my goal for ABC and the volunteers, to run this organization as a business with large fundraisers.

Over the years many difficult decisions have been made, however, these decisions have helped place ABC in a sound financial position to ensure we continue to help the abused, abandoned, and unwanted bassets for many years to come.