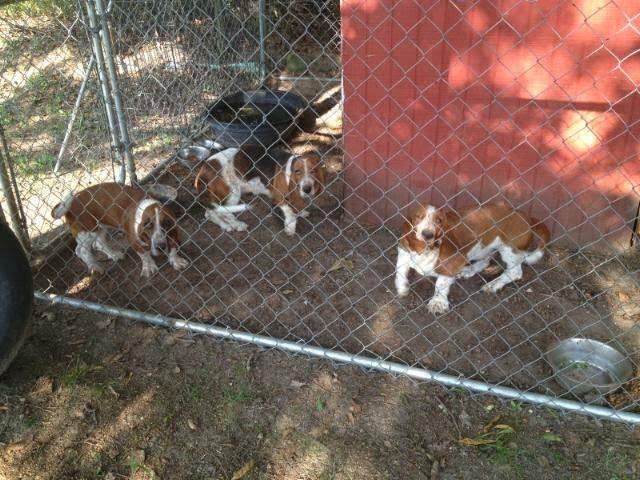 From time to time ABC is able to help rescue basset hounds from all over the country, but sometimes we do not have the capabilities to get to the dogs in a timely fashion. When this happens we call upon the help from Pilots ‘n Paws to get bassets in need to New York. This was the case when ABC’s intake coordinator, John Morrison, got a call about three basset babies that needed some help from all the way down in the Florida Panhandle.
At the end of August, John got a call about three 1 1/2 year old female bassets (Bama, Julep and Georgia) that needed some help. Their humans parents had broken up and the the bassets ended up at a relatives house. They were kept in an outdoor kennel far away from the house. They had a small beat up doghouse for shelter and only got attention when they were fed. There was no love. There were no treats. There was no petting. There were no baths. There were no belly rubs. They hadn’t been to the vet in over a year. They needed all of their shots updated and to be spayed. The relatives who were feeding them decided that they wanted to get rid of them and put them up for sale as breeding dogs.
Candy knew that this wasn’t the best situation for these three young girls and convinced the relatives to sell her all three of these bassets. She drove through a flood in her area to pick them up and found them in the small kennel (as shown above). She knew she couldn’t keep all three dogs and wanted to make sure they got into a good rescue. She started making phone calls and contacting rescues. This is when she was referred to ABC. When John found out about them and their story…he couldn’t say no. So, he started trying to make plans to transport them up to New York.
With alot of planning, last weekend Bama, Georgia and Julep made their two day journey to New York. John worked with Leslie at Pilots ‘n Paws to make all of the arrangements. Pilot Jeremy  flew them on their first leg on Saturday with Pilot Susan picking up the second leg that got them into North Carolina.
They stayed overnight in a wonderful temporary foster home with Dana. She picked them up at the airport, kept them overnight and delivered them back to the airport on Sunday for their next day of flying. On Sunday they took three more flights to get up to their permanent foster home.
Pilot Christophe, Michele & Cheri and Madhavan & Sergei all took turns flying them in. They made it safe and to their ABC foster home Sunday afternoon.
“The Florida girls” as I’ve been calling them will now get the vet care that they need and will also each have spayed surgery. I’m told that they are shy, but excited to see people. They come when you call them and will sit down with you. It is thought that they have just been neglected for so long that it takes a little while to trust people. They love each other and haven’t known much of each other for awhile. I can assure you that Bama, Georgia and Julep will find the best forever homes that ABC can find.
It amazes me that so many people were able to pull together to make sure that these basset girls made it to New York safely. It was alot of time and work for everyone involved. I know that I speak for everyone at ABC and “The Florida girls” when I say “Thank you” to the long list of volunteers who helped along the way (I hope that I mentioned everyone above; if not I apologize). A special “Thank you” to Candy who took it upon herself to rescue these special bassets and do all the work to find them a safe place.
Accessibility by WAH
Text Us