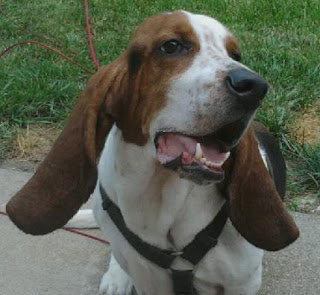 We’ve chosen Buddy’s story for this special time of year as it best shows the wonder of the Basset Hound. So often folks question why we work so hard to re-home Basset Hounds. Their reputation as a breed in the U.S. isn’t great. They are stubbornly insistent on their own way (in loud voice), manipulative, and prone to a host of physical ailments. Perhaps the worst criticism of the breed is that they are difficult to housebreak and train. These traits can be found in most dog breeds as well as mixed breeds. However, Bassets, bred as the poor man’s hunting dog (their masters didn’t own horses to keep up with them), needed to work independent of man and together as a pack, with little or no supervision. In the working Basset, independence of thinking, persistence, durability, and the hound trait of loyalty and affection to its pack make the Basset the perfect hunting companion.

So perhaps these traits are a little more pronounced in the Basset, and hounds in general, than in other dogs. I’ll never forget struggling with Apollo, my first Basset – and perhaps the most stubborn, pigheaded, persistent puppy that has ever graced the Earth. I’d had dogs before, and bought all the stuff about being pack leader and discipline, but none of it worked with Apollo. We brought in a professional trainer and paid him tons of money (he relied mostly on treat training), with disastrous results. Apollo loves treats, but he loves getting his own way even more. In desperation (not knowing about groups like ABC) I turned to a Basset Hound training manual for Dummies. I’ll never forget the advice in that manual that worked was as simple as common sense itself. It said you can’t discipline a Basset into behaving – you have to let him think the good behavior is HIS or HER idea. This is all that ever worked with my Bassets. Positive reinforcement, a little telepathy and love do the trick. Maybe that’s the way we should train all breeds.
Sometimes I think Bassets are actually smarter than their humans. Usually, I’ve found that their way is the right way. We never had housebreaking issues – UNLESS they were left for too long a period of time. They will always pick the easiest wooded path. They are loud when they need to be to let me know some stranger is at the door, or that something in the house isn’t quite right. They insist on sleeping on the bed, but I know that no one can get past them to do me or my family any harm. These are the very same traits that create such criticism of the Basset breed. In a secure, loving home their loyalty and fierce dedication to their humans’ well-being is, quite simply, astonishing. They are affectionate to a fault, loyal, intelligent and loving – usually not only of their own family, but of everyone and every other animal as well. What would you pay for this kind of companionship if you could buy it off the store shelf? Any relationship between canines and us is a lot of work – at least in the beginning. And, it seems, in these times ‘a lot of work’ often results in a homeless hound. But the joy and happiness a Basset can bring to a household is worth so much more than the work it takes to get there!
Buddy’s story shows how a secure, loving environment (not least of which includes a network of support like ABC that is responsive to the breed’s issues) allow the Basset’s strengths to be an enormous help and positive influence in family life. Buddy came to ABC as a 3-year old untrained, un-housebroken, neglected and malnourished hound. He had not been neutered. He came from a broken home who had put a 17 year old in charge of taking care of him. His meals and walks were often forgotten, and he was 10-15 lbs underweight. And he was sick, with Lyme’s disease. This is the sad story of so many hounds that wind up in shelters that deem them un-adoptable. Thankfully, for Buddy and his forever home, he was relinquished to ABC Rescue. His foster parents Kandy & Tom did an amazing job of training him to get him ready for his new family, and ABC went the extra mile to treat his illness and support him through this learning period. For all that, I’ll bet Buddy is an exceptional hound. At 3 years old it’s much tougher for a hound to learn everything he needs to learn to live in the world of humans than it is for a puppy who doesn’t have to unlearn bad behaviors.
Buddy’s adoption listing describes him as a spunky 3-year old with lots of personality. If you had a bad day at work, no problem – Buddy will be there to greet you and brighten up your entire day! All he asks in return is lots of love & attention.  Guy saw Buddy’s picture on the ABC website, showed it to his children – that, as Guy says, “was all she wrote.”
Some things are just meant to be, and as Guy writes in his letter to ABC, Buddy came into their lives when they most needed him. Guy’s family brought Buddy home on a Saturday and, sadly, Guy’s Dad passed away on the following Monday. Guy tells the story best in the following beautiful letter he wrote to thank ABC for Buddy’s life. 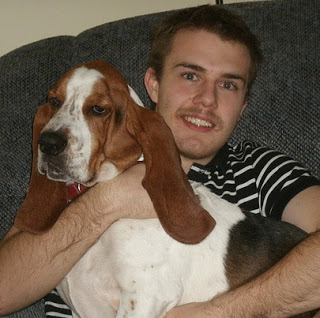 December 13, 2011
I just wanted to let you know what a wonderful addition to our family Buddy has been. I’d always wanted a basset hound but somehow it never happened. There on your website was a picture of Buddy. I showed it to my children and that, as the saying goes, was all she wrote.
Maybe all bassets are special. Maybe we were just lucky Buddy came into our lives when we needed him most. We picked Buddy up on a Saturday. That Monday, sadly, my father passed away. It was the first time my children, both of whom are commonly called “special needs” have experienced the death of a family member. It was particularly hard on my son. He and Grandpa always had a singular relationship. As hard as such a thing is to get through for a “normal” person, it would have been doubly so for Jacob. I’m not sure how we would have done it were it not for Buddy, but Buddy was there for him and made the difference. I will never forget the sight of my son, full of grief, burying his face in Buddy’s coat and sobbing, and the unbelievable tenderness with which this wonderful hound responded. He was so gentle and patient with Jacob. I don’t know how Buddy understood what was happening, but understood he definitely did. He provided solace and companionship not only to my son, but to all of us just when we needed it the most.

Buddy follows Jacob everywhere. When Jacob leaves for school in the morning, Buddy is there to say goodbye. When Jacob comes home, Buddy is there waiting for him. The joy on both their faces at this daily reunion is a pleasure to behold. In fact, the only one who ever gets kisses from Buddy is Jacob. Buddy’s tag lists Jacob as owner, something my son is immeasurably proud of, but the fact is, there is no owner in this relationship, there are only best friends.

Our most heartfelt thanks to your wonderful organization and particularly the Van Skivers, Buddy’s foster family, for all that you do for these special dogs.
Sincerely,
Guy L.
What a wonderful letter and what better answer to “why rescue?”
As a footnote to this story, Guy wrote me a wonderful tale of Buddy in the midst of construction work he was having done at his house. I’m reproducing it here because it shows so well the independent thinking and passion of the Basset breed:
…”It was a big concern of mine that Buddy, who believes a Basset Hound, by definition, is an integral part of any activity, would prove to be too much of an overpowering presence for the men to actually get any work done. I assigned my daughter the task of keeping Buddy at bay. Buddy of course found this to be intolerable and vocalized, loudly, his opinion that without his superb managerial skills the project was doomed to utter failure. No doubt you can imagine the tension this caused for all concerned. Finally the decision was made by my daughter to give Buddy his way. Amazingly, for a human but not for a Basset I guess, it turns out he was correct. The contractor told me that Buddy is quietly content to sit out of the way and watch the work being done, offering helpful advice, (Buddy’s supervisory skills are so great that he conveys his message with just a soulful glance at the right moment) along with a head that loves to be scratched whenever someone needs a break. Now the men working on the house want Buddy there watching them. They say “he’s a real sweetheart”. I fear Buddy’s ego will be intolerably huge after this episode. He definitely has been sporting an “I told you so” look of late.
That’s “Basset Hounds 1, humans 0.”
I don’t think Buddy’s ego will suffer – he’s probably always known that he knows best!
Yes, all Bassets are special and deserving of such a wonderful home as Guy and his family provide. Thank you Guy, Jessica and Jacob for adopting Buddy and for being his “best friends”.  Thank you for giving him such a wonderful forever home. Last, but not least, thanks so much to ABC for getting him there. We wish Guy, Jessie and Jacob, family healing and peace from the grief of their loss, and much love for the Holidays.  May you have many happy, healthy years with Buddy to enjoy.
Font Resize
Contrast
Text Us